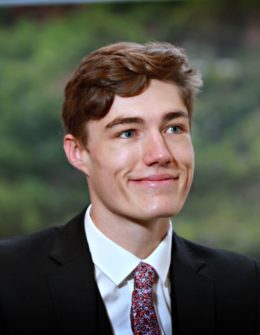 George Smith is a Barrister with a mixed common law practice accepting instructions in all areas of Family and Crime.

As a Family law practitioner, George regularly appears in the family court dealing with all private children and care matters.

In care proceedings, George has acted for Local Authorities in numerous hearings including case management hearings and multi-day adoption hearings involving multiple allegations. He has appeared on behalf of parents in urgent applications and contested removals. Acting for children, George has appeared in multi-day hearings. Recently George was led in a 17-day hearing by a senior member of chambers. The case involved cross examination of a child and parties who were litigants in person.

In Private Law proceedings he has acted for parents and children in matters from the Magistrates court to the High Court involving domestic abuse, contact and non-molestation orders. George has acted in contested fact-finds and other multi-day hearings.

In Crime, George has acted for the both the prosecution and defence. He is a grade 1 prosecution advocate and has experience prosecuting lists in the magistrates including trials and hearings on legal arguments. George frequently appears on behalf Defendants in the Crown and Magistrates. In the Magistrates he has appeared in trials and in the crown has represented defendants for PTPH hearings, sentencing and for emergency bench warrant hearings.