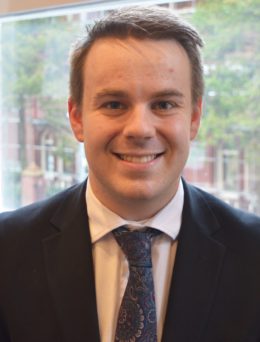 Callum has been instructed in a full range of Crown Court matters for both the Prosecution and Defence. He is a current Grade 1 Panel CPS advocate, and is developing a significant Crown Court defence practice.

Callum is eligible to appear in the Youth Court and has a significant amount of knowledge and experience defending Road Traffic matters in the Magistrates Court, as well as on appeal.

Callum has been instructed in respect of a number of regulatory matters. Due to his strong research skills, picking up new and unusual areas of law is less challenging for him than many other practitioners of his level of call.

Callum has experience in cases involving Sexual Risk Orders, and has a growing interest in this complicated and niche area of law.

Prior to joining the bar, Callum had an extensive background in advocacy and performance, including sketch comedy as part of the Middle Temple Revels.

R v JM [2021]: Defending – Assault of Emergency Workers – Cross-examination of the complainants led to the Crown offering no evidence in respect of one prior to closing its case, and a submission of no case to answer being upheld in respect of the other. Not guilty verdicts directed on all counts.

R v JB [2021]: Defending – Possession of Bladed Articles – Defendant acquitted on all counts, despite the reverse burden of proof in respect of proving a good reason. Significantly prejudicial material excluded after a successful application under s78 PACE.

R v X [2021] – Appointed by the Court in relation to a ‘Trial of the Act’, where the Defendant had been deemed unfit to plead and unfit to stand trial.

Operation Guy [current instruction] – Instructed in relation to an allegation of Assisting an Offender following a homicide, defending.

Officer of the Traffic Commissioner v AH [2021] – Instructed to represent an individual whose HGV license renewal had been refused due to him having 18 points on his driving license. The starting point for a driver conduct punishment after receiving 12 points would be 6 weeks suspension from driving, per the statutory guidelines. After extensive legal submissions in relation to the statutory documents and case examples, the HGV License was renewed and the driver only issued a warning.

Royal Mail v MB – Instructed to prosecute a postal delivery driver accused of stealing over £75000 of goods from the course of the post.

West Mercia Police v JS [2020] – Led Junior, representing a man against whom proceedings had been brought after prosecution for possession of IIOC. Responsible for the drafting and delivering of a successful application for strike out due to abuse of process relating to large parts of the Applicant’s case. The SRO application was withdrawn, and the Respondent received the vast majority of his costs.

Warwickshire Police v X [current instruction]: Instructed on behalf of a Respondent. Issues relating to potential criminal charge & Respondent’s right to silence had to be considered and advised upon.